Gold is the premium currency in Call of War, it might be used to obtain various benefits. You can also play and win very successfully without Gold, but sometimes a targeted Gold operation may also be the deciding factor for a victory.
The premium account is called High Command. As a member of the High Command you can use certain functions, which are not available to other players and especially help players that are not online around the clock.

Exclusive features for Members of the High Command:

Gold might be used in various places in the game directly: it allows you to research and construct faster, decrease enemy province Morale, start a propaganda campaign to raise your own provinces' Morale, increase the condition of your armies and more. Each function that allows the use of gold has a gold button. Even resources might be purchased for gold. This example shows the possibility to speed up your research: 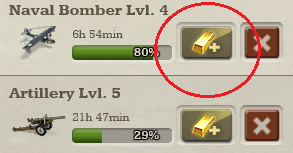 If your or your allies troops return from the war or are weakened by a forced march, you have the opportunity to increase their condition, by sending them reinforcements. The costs are based on the total strength of the army: The higher the attack power, the more expensive the gold costs. Increasing condition for mechanical units is therefore more expensive than infantry units, as they have a greater attacking power. The condition increase can be found in the Army bar. If you move your mouse over the button, the calculated costs for this special ability will be shown.

If you build a building, you can reduce the construction period of the building by 12 hours. This is possible by selecting the province and clicking on the Acceleration-Button in the Province bar. You can also do it inside the construction menu.

Just like the decreasing of construction time, it is also possible to do the same with units for a production speed increase of 12 hours. To do this, select the province and click on the Acceleration-Button in the Province bar. You can also do it inside the production menu.

In addition to the usual Spy options in the Espionage menu you'll also find the possibility to engage a Master spy. For these "Instant Actions" you do not have to recruit and assign spies, instead you will pay with gold to receive the benefits and spy reports immediately without waiting for the day change.

Getting gold
Gold can be purchased in the Call of War Shop or by earning it for free. You can earn gold for free by winning games or by staying active until the end of a game round, as well as by collecting achievements in your user profile.